What's Wrong With This Picture?

So I swore I wouldn't do another equine now ad so soon but this one just took the biscuit. No prizes for spotting the problems here... 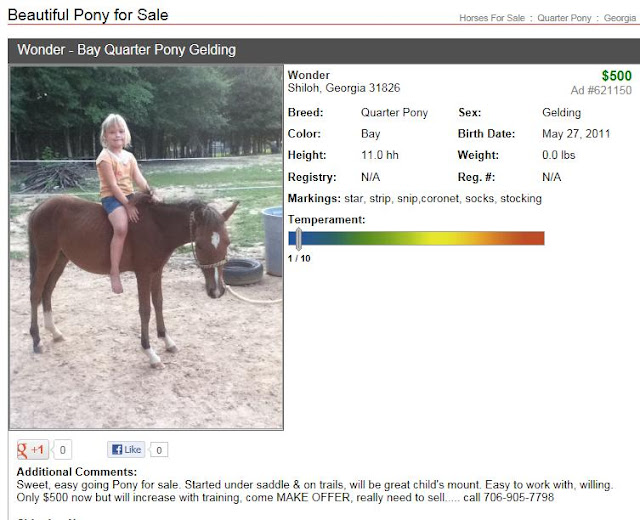 So hey, does this look like a foal to anyone else? Well maybe that's because it certainly was when they began the poor soul's 'training'. At best he was a year and a little bit!

Did I mention he was lucky to be a year old when they started him by the sounds of it?

Also no shoes on child who obviously has feet impervious to being trodden on by the surprisingly tough feet of a foal... which by the way, they have been riding.

Just a heads up for any kind potential buyers; with those ribs and that round belly I'd be looking to worm this fellow ASAP.

Did you notice he's been out on trails? I think it's too much to hope someone was leading him in just a headcollar... I'd put money on him being ridden.

Quiet?! I bet he is. He probably can't get his BABY brain about what's happening to him. Would you send that little girl out to work in an office and expect her to do a half decent job and not end up stressed and resentful in a few years time? No? Why do people think horses should be any different? Where's the rush! He could have a good 30 years useful life ahead of him, given time to mature. At this rate he'll be knackered and riding to slaughter by five.

Email ThisBlogThis!Share to TwitterShare to FacebookShare to Pinterest
Labels: foals, Too Young, Unsafe