Advert of The Day 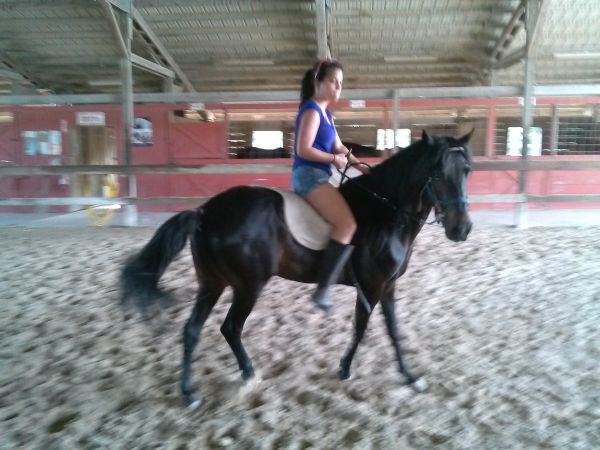 This was the only photo accompanying the ad which is selling a small stallion who is being strongly promoted as a comfortable ride for long trails or riders with back problems. Here's the issue. Neither the horse or the rider look comfortable in this shot! The girls expression and her hands, and the horses face, tail and the way he is moving, suggests they are having a real difference of opinion, however momentary. BAD PHOTO TO USE!

That's not even touching on the fact it's blurry.

Finally just how comfortable can you be in what appear to be hot pants and wellies?!

Here's the rest of the ad:
MiniMe as we like to call him is a very sweet stallion he rides amazing very comfortable for someone who likes long trails or maybe has back problems. Looking to find him an amazing home to trail rideor maybe even show since he does have alot of brio and the look for it. He is a lil thin because we did rescue him from a hard situation but he is getting more beutiful by the day. come meet him he wont disappoint

call me or text
He needs to find his new home by this weekend please make an offer.
Mary
might trade for maybe a dressage mount

Hmm, so sweet he has to be outta there in days... and of course they might trade for a dressage mount. I wouldn't hold your breath folks!
Posted by Xenomorphic at 10:32 No comments:

If only Child Labor Laws Applied to Horses..

You know, I think some people consider waiting until a foal is weaned leaving their education too long.

20 months and broken to drive: 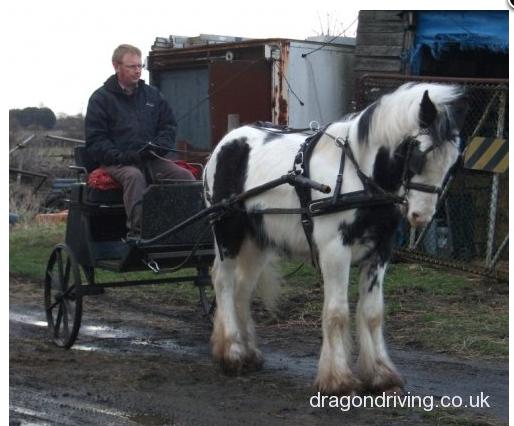 Ironically also pictured with a little girl, both looking like the babies they are... 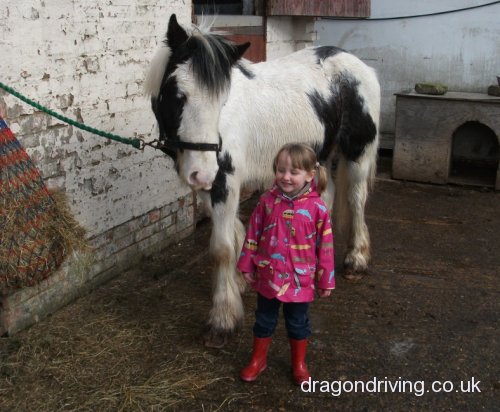 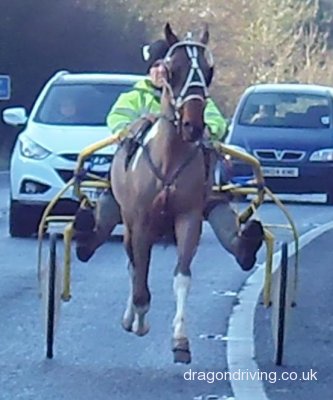 Broken in as a yearling. Yes a YEARLING: 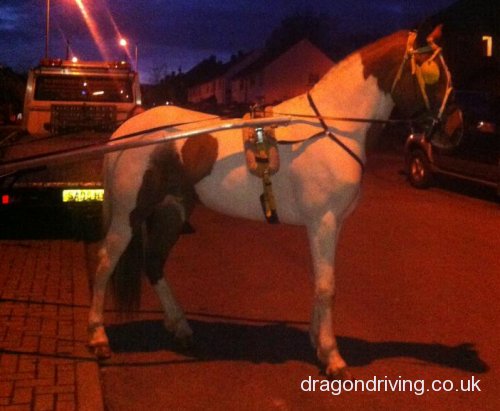 Done everything at 3 years old: 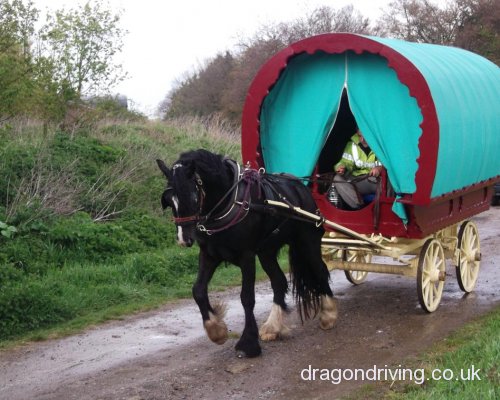 The last ad boasts about how this horse has:

pulled a living wagon from Durham to Kent, 21 days.

The first picture (below) is him pulling across Tower Bridge, did 340 miles in 21 days. 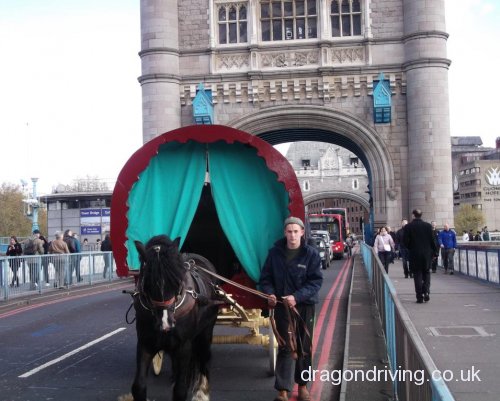 Well I guess these people are selling these young horses, so they don't have to deal with future possible temper tantrums and/or crippling arthritis in legs and spine caused by doing too much too soon.

I just wish people could take a step back and give their horses time. It provides for a much longer, more productive working life span, and a much happier horse mentally. Sadly on dragon driving at least, it seems taking it slow will never be the popular approach.
Posted by Xenomorphic at 08:51 No comments:

Email ThisBlogThis!Share to TwitterShare to FacebookShare to Pinterest
Labels: sad story, Too Young

Your horse is a stud, 9 yrs old, 17 hands and weighs in the region of 1,300 Ibs. Given that the rate of economic growth in the US is around 2.4, the ratio of available horses to good, caring homes is around 300:1 and you have priced him 0.00 dollars, what is his % chance of going to slaughter?* 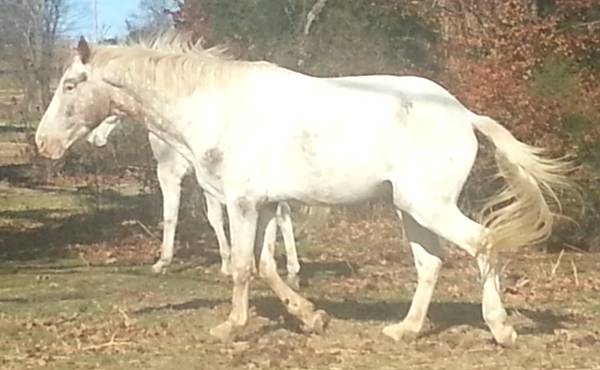 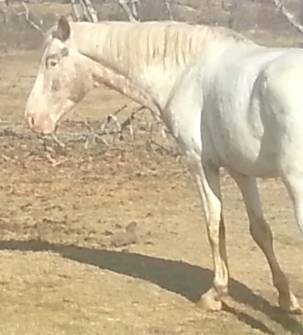 I can't take care of this stud horse by myself he is 17 hands has huge bones and feet he has destroyed my fences I can't do this anymore he went through a fence and cut open his chest and damaged his eye his dad is a national champion warmblood but if I don't find someone to take him I will have to have him destroyed I doctored his cut for couple of days and when I attempted to doctor it tonight he struck out with both front feet I don't know if it hurts him or what this horse weighs about 1300 pounds he is very tall around here when you say you have a huge horse they think you mean wide he is very tall and very big boned and built like a Lippizanner. this is not a children's horse he must be well handled before anybody other than an experienced person gets around him and if you think you're going to turn around and make a quick buck on him it is not possible he needs to be handled and his cut doctored before you could ever be able to sell him my phone number is fifty two. Twenty. Seventy. Owe to. do not call me at a ridiculous hour.

Why exactly is this horse a stud?! He's hardly overflowing with desirable features, physical or behavioural by the sound of it! I don't find huge bones and feet a selling point, particularly not when he's using them to trash his environment.

I don't know if it hurts him or what..

Yes it probably does- anyone ever fiddled with one of your injuries?! Here's a thought, maybe an infection has started to brew and his patience has been exhausted by increasing discomfort.

This bit I don't get:

He is very tall around here when you say you have a huge horse they think you mean wide he is very tall and very big boned and built like a Lippizanner.

His size and build is not a remotely positive feature given that he's already learned to use it against people and things that get in his way! How about telling us if he's ever done anything, ever been saddled etc? I am guessing not!

I can't figure out how this person ended up with this horse in the first place. Maybe it was drugged when they tried it, maybe they bred it, threw it in a field somewhere and only thought, 'gee that colt of mine's got pretty fiesty' when they went to find it years later! But I am sure I am thinking exactly the same thing everyone else with any horse sense is thinking after reading this advert.

He is a STUD! A stallion!!! He wants to mate with things and if you're not directing that energy somewhere else, i.e. into serious competition work, he's going to go to any lengths to do that! Including through fences and over the top of YOU if you haven't instilled enough respect in him on the ground.

So why, why WHHHYYY ON EARTH don't you just get him GELDED, remove the hormones and reassess the situation after a few weeks before puttinga bullet in his head, handing him over to a masquerading slaughter man or palming him off on some naive do-gooder who might end up getting pounded into the ground by their mercy 'purchase'?

Is it not that obvious to EVERYONE that this would be the next step to take?!

*- figures quoted are rough estimates and for blog writing purposes only.

Thanks again to horse forum contributors for this one.
Posted by Xenomorphic at 22:19 1 comment:

Not by a child! She's outgrown her rug! 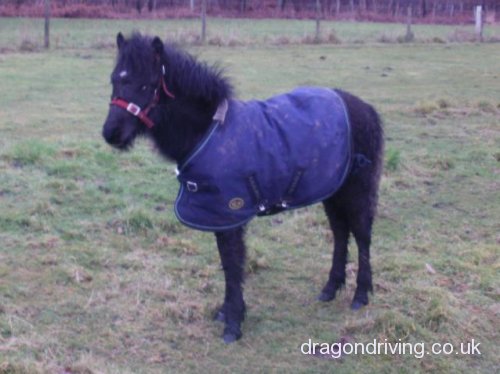 Um, I know people make do at times, but is it not a better idea to take the rug off just for the picture so you don't look a bit... mad?!

By the way she is sooo cute. And selling with mum (below) for the sad price of £150... please buy her and spoil her with a blankie that covers her little butt! 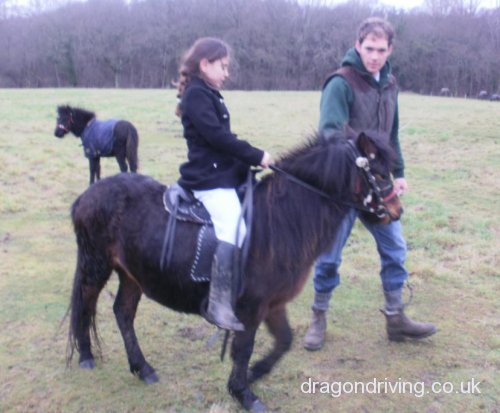 Posted by Xenomorphic at 02:13 No comments: 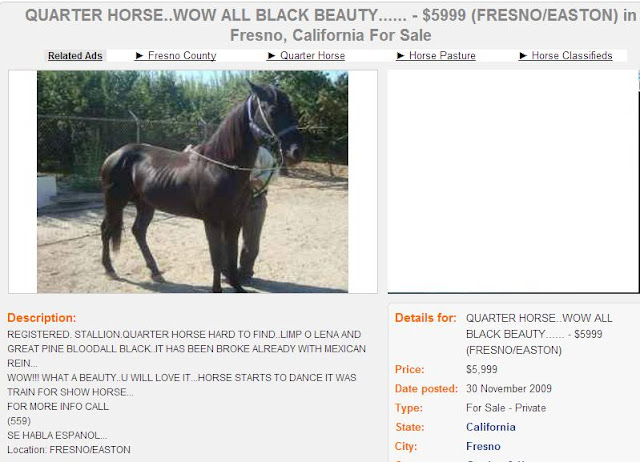 *sniffles* But, but Black Beauty was a friendly horsey!!

Ok, so first of all and most negatively to the advert at first glance this horse looks seriously p***ed as all hell. See close up: 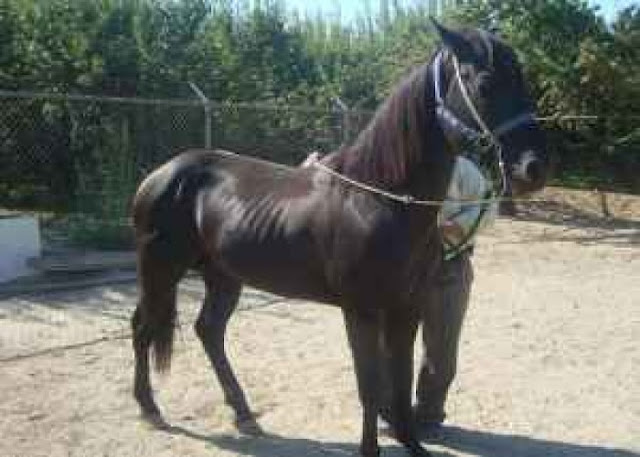 He may be hungry as he looks pretty ribby, or maybe he's just objecting to that godawful piece of thin metal in his mouth. Either way his expression says get the **** away from me. Not the most inviting shot for a sales pitch!

Secondly do you think those front hooves have been deliberately cut out of shot? Because from the knees down they are not good looking legs and I am wondering if the horse is actually sound.

Overall total picture fail. But we go on...

Thirdly 'Quarter Horse, hard to find'. ????. Do you mean he goes to hide in his field? Because I can think of barely any regions in the USA where the Quarter Horse is a rare breed. It's like the UK equivalent of black and white hairy cobs- dime a dozen and everywhere you look.

Finally; 'Horse Starts to Dance', you mean all the time? Your average rider would kind of like a horse that keeps still on occasion please!

Today's short but not sweet ad of the day is brought to you courtesy of the good folks over at Horseforums.com; thanks guys your thread on dumbest ads is a goldmine!

Posted by Xenomorphic at 05:15 No comments: