This ad is just full of contradictions... 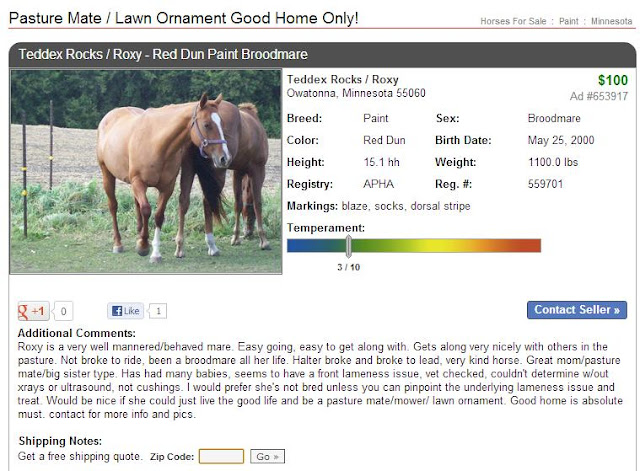 Spotted the issue? Yes she's being described as a broodmare throughout the ad. And effectively she is- she's never been broken. She's had LOTS of babies. But you mustn't breed her. Because she's lame, and no one knows why.

Question; why on earth decide breeding from her is not a good idea only when you finally decide to sell her? Maybe it would have been smart not to start breeding from her in the first place? Because the one thing the good old US of A is in dire need of right now is more chestnut quarter horses that are lame and unrideable. Without knowing why this mare is lame, there is a definite chance that she has passed some unseen defect on to her offspring.

If the seller is serious about wanting this horse to go somewhere where she won't be bred anymore, they really should have taken the word broodmare right off this ad, because there are still people out there who are dumb enough to think breeding horses is the way to make money, and if it's got a functioning uterus, they'll have a go with someone's colt up the road. And they'll start by looking for cheap broodmares. And guess who'll pop up when they search for that- yep our chestnut friend up there. She could be hobbling on one good leg, and that wouldn't stop these people from thinking her foal would be worth millions (by some miracle) and getting her pregnant as fast as they can wheedle her away from her current owners with promises of lawn-mower duties.

A REAL broodmare is actually a hard thing to find. The queries over the horse above are very obvious, but there are so many mares being touted as breeding prospects when they are anything but. Here are some things that DON'T make a horse a broodmare prospect, yet have actually been used on sale adverts as reasons for a mare being sold as one:

If a horse has never been able to stand up to being ridden, breeding would be a very bad idea- conformational issues can readily contribute to unsoundness and of course could easily be handed down to the foal. One of the most worrying things I've seen is the number of mares being offered as broodmares which can't be ridden because of navicular syndrome. This is a bit of a catch all description for a serious and often crippling foot disorder, but given that many experts feel hoof conformation is a major factor, why would you breed from a horse with this issue?

A good broodmare should be conformationally and generally correct for her breed/type (colour, height, build etc.), have a kind temperament, be fit and healthy (certainly no long term mystery lameness- although mares that are lame through accident and can no longer be ridden can have foals with vet clearance), and if she doesn't have impeccable bloodlines to speak for themselves and a family that have proven themselves in their field time and time again, have a good competition/show record. If that sounds like a lot to ask, take a look at the horse sale ads yourself. You can pick up an average horse for peanuts and there are already too many lovely horses unable to find a home. Why risk breeding something with little chance of at least producing a very nice foal when you could buy the same for less than the whole operation would cost?

Basically, if you ARE looking for a broodmare, I'd forget looking for freebies and expect to shell out at least as much as you'd pay for a competition horse of good quality. In the current economy, it's just not worth breeding from anything less.
Posted by Xenomorphic at 21:24