Here's a little cutie for you. 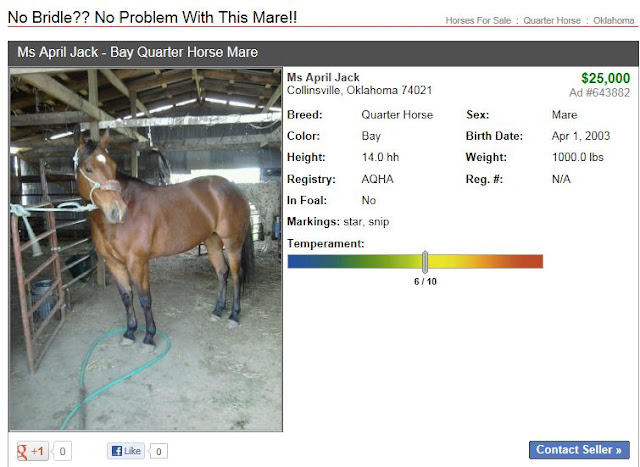 Additional Comments:Ms April Jack AKA April is a great mare! You can do ANYTHING on her, EVEN RUN a barrel pattern bridleless!! She'll side pass, use FULL leg pressure, spin, flying lead changes, cross anything, go anywhere, rope anything, and can flat fly! Ive owned her since she was a 2 year old and have taught her everything she knows. This horse has honestly been everywhere. Ive rode her into town to sonic before I got my drivers license to get food (roughly 10 miles one way), Ive rode her up and down every road in my town, shes been in countless homecoming and christmas parades. one year being the grinch. always ridden to the parade never hauled there. crosses railroad tracks like its nothing. been hooked up to a cart with no prior training for it and absolutely did nothing, ive jumped her over barrels with no schooling, nothing bothers her at all. anything you think a 9-17 year old kid would put a horse through shes prolly been there! She's done an extreme cowboy race and won it with the fastest time completing all the obstacles! She runs barrels and poles. I prefer to run poles off her (she likes them better) and shes awesome, very quick! 21-22s are her times, she also runs barrels like a dream, 100% automatic! just sit there and soak up the money. NEVER has wide barrels! have even run her bridleless countless of times! have all the videos to prove it! She's ran in mud, rain, everything she has the BEST footing ever! if its ever been muddy ive run her whippin and kicking the whole way and never had her slip, she runs barefoot too never had shoes! Runs to either barrel first just whatever she's feeling that day is the barrel we choose! shes been worked on cattle, breakaway roped off her, tied some goats off her, nothing bothers her what so ever, loads and hauls like a dream, stalls at night, stands tied all day, you can clip, bathe, ect ect with her and she'll sit there. shes 100% bombproof. I can keep going on about all the places shes been and what all she does but thatd take a lifetime. I have put my heart and soul into this mare to get her where she is! Although, She has ONE issue that if you know how to handle it its no big deal. Its in the alley way. I'd prefer her to go somewhere that the work is not in the arena! Like ranch work.
call and lets talk (918)289-5689 If I dont answer im either riding or working so leave a voicemail or text me and i will get back to you asap!

Yes $25,000 (by current currency conversions that's about £15,500 here in the UK!)!!! And yes, it's serious, and the ad's been there for AGES so I am sure that if it was an error the owner would have noticed by now and changed it.

As a quick aside here are some other areas in the write up that I am a little concerned with...

That means nothing either, certainly doesn't mean you could actually drive her. Also, attaching a horse to something that it might decide to be scared of at any second and then not be able to get away from without building up to that point with proper training is plain stupid. Here's how quickly that can go from bad to total carnage:

if its ever been muddy ive run her whippin and kicking the whole way and never had her slip...

Whoopee! You can thrash the heck out of your horse on bad footing and she won't fall over, that's WONDERFUL!

I have put my heart and soul into this mare to get her where she is! Although, She has ONE issue that if you know how to handle it its no big deal. Its in the alley way. I'd prefer her to go somewhere that the work is not in the arena! Like ranch work.

This horse might be fine to be ridden bridleless but apparently throws a fit of some sort in the alleyway?!

Do you know many ranchers who are even able to pay 25000 dollars for a horse?!

Crikey do you know many PEOPLE?!

If I were going to buy a horse for that much it had better be as close as perfect as you can possibly get! Little issues- no thanks. Being rideable bridleless is a nice little trick, but that's all it is, and there isn't much market  for it where the big money is- in the show ring.

Here's the biggest problem this seller has- sorted by price her little bay mare shows up right alongside the following horses- so as a potential buyer, for your $25,000 you can have instead:

This imported Perlino stallion, bred to perform, eligible for inspection for full stallion approval, in pro training for dressage and show jumping... 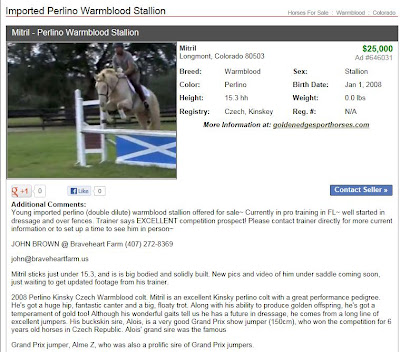 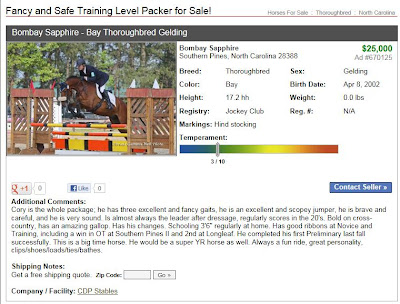 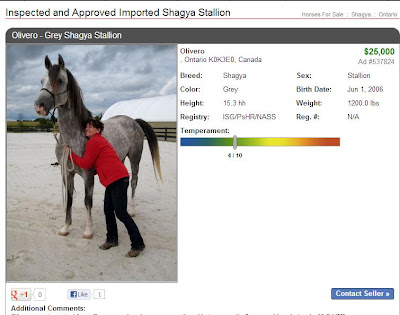 This adorable Buckskin Azteca mare, with show record and in foal to an Andalusian stallion for 2013. 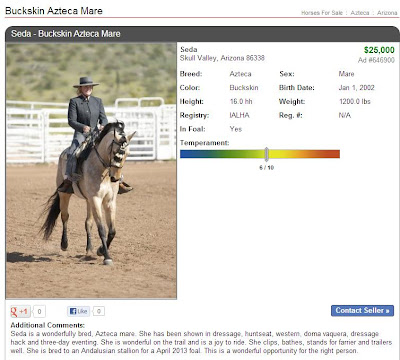 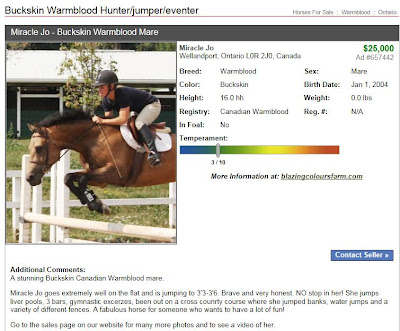 I'm not saying that they are all correctly priced by contrast, but what I am saying is that for that amount of money, I'd go for any of them over the bay mare. Either for total lack of hangups or for future potential. And that's on ONE WEBSITE!

Truthfully, I think the seller is living in a dreamworld. Maybe she's young and inexperienced, but her pricing on many of her horses is as way off as you can get. I went to her seller page and found that she also wanted $10,000 for this blemished quarter horse mare. Um, I think you might struggle there. Again she pops up alongside show winning animals, including fully trained and finished cutting and reining horses. 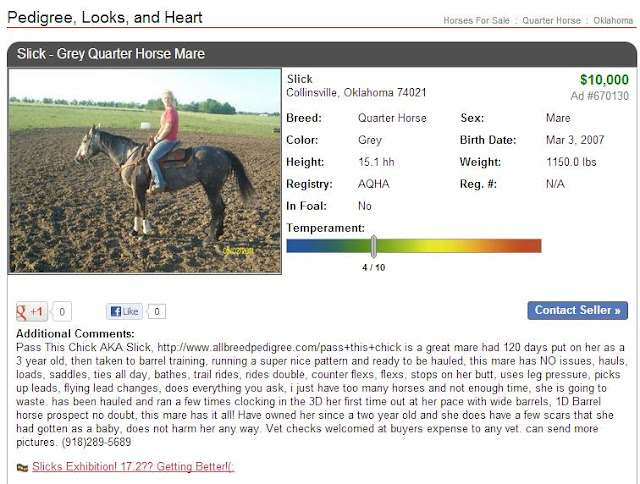 So on a serious point, don't know what to price your horse? Look around and see what else buyers are able to get for their money. Several sale websites allow you to order by price. Price your horse in your head, go to that price bracket, and check out those horses. Does yours compare? Great, that's your price. But if he'll be up against horses that have no issues when he does, or have fantastic show records when he doesn't, and so on, be a little more realistic. Lower your price, or you'll be paying out much more to keep him right where he is for the foreseeable future.
Posted by Xenomorphic at 07:28