I'm not going to lie, this ad did entertain me.

14.2hh Ride and Drive Gelding - New
14.2hh 5 year old coloured gelding. Excellent to ride with excellent manners.
Good to hack out alone or in company and drives well, traffic does not phase him.
He is passported and microchipped and recently been wormed. He is now all ready to go to his new home.

So things are not GREAT in the first picture... but I'm sure we've all seen worse. The guys not got a very good position, and his attire is very questionable (THOSE wellies?!)... but it's the second shot that really makes it post-worthy... 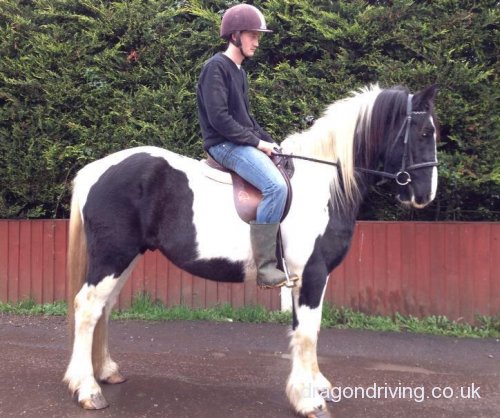 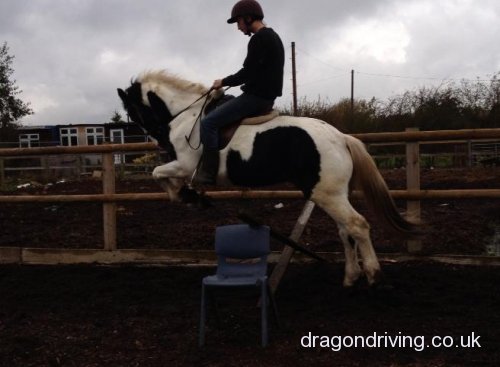 Ok, I sniggered. Sorry if that's mean, but what the h**l?! Has this rider EVER jumped? Poor pony's forward motion has been so abruptly arrested by the weight of the guy on his back that his nose is touching his chest! This is one of those cases where a nicer picture of him maybe being trotted (assuming the rider can trot of course) or even just walked on the flat would have been so much more encouraging to see.

All I'm learning from this as a potential buyer is:
1-Pony has jumped
2-If pony was jumped like this more than a few times I'd assume pony has also learned to stop rather than end up with no teeth and serious neck strain!

That's not even mentioning the handsome plastic chair jump stand and the fact that the 'poles' look like flat, rotting wood which would probably do some damage to pony or rider if either should end up on top of it and snap it.

*sigh*
Posted by Xenomorphic at 13:21 No comments:

Mouthed and backed- great yes? Until you see the pictures... 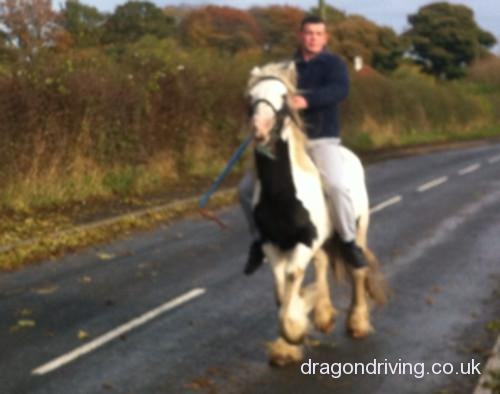 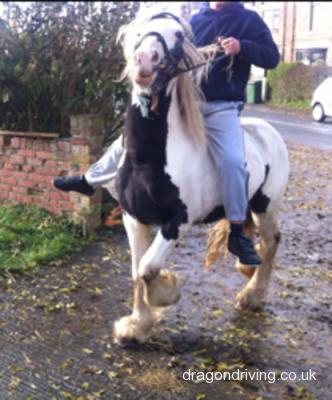 Perhaps they meant DE- mouthed and DE- backed?! An 18 month old little filly, being pounded around hard roads by a guy who is not small and has the balancing ability of a tortoise with an ear infection?! How can permanent damage not be done?!

I just cringed at these shots. Especially the second one- like most normal people surely would, I took one glance and said OUCH. It boggles the mind that someone looked at it and said, yeah, that's a GREAT shot to sell her with. But someone DID!

My brain may have just exploded.
Posted by Xenomorphic at 06:00 1 comment:

Email ThisBlogThis!Share to TwitterShare to FacebookShare to Pinterest
Labels: Advert of the Day, Bad Photo, Bad Rider, Too Young

Why Bother Looking After it if You're Only Going to Sell it?

So how old would you guess this horse is? 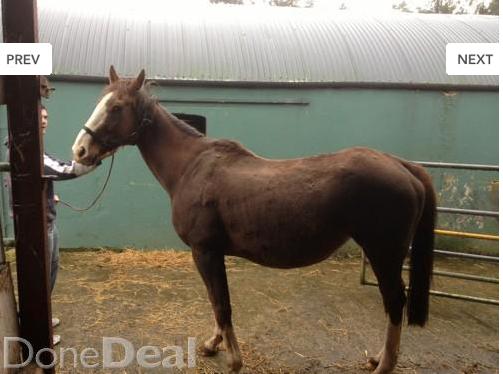 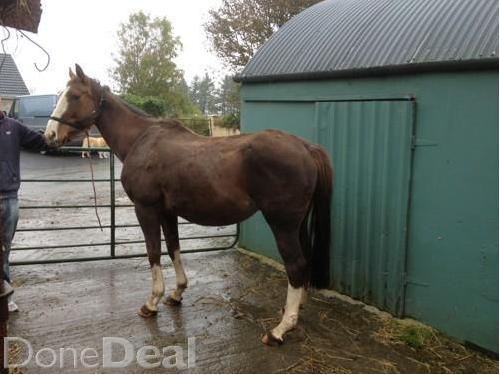 Would you believe she's only seven?!

She looks like a badly kept 20 year old- many well kept veterans would put her to shame. She's had foals, heaven knows how many- it doesn't say. That might explain the dropped belly, or she could be in foal again, or, looking at the overall picture, she could be in desperate need of worming. There's no shine at all in that coat, her scrawny neck and prominent spine, withers and hips indicate her lack of condition. Ad says she's very quiet... boy I'll bet. She could barely raise a canter in that state.

I know she'd probably look a lot better well cared for but working from these admittedly poor shots I would never consider her ideal breeding material. Her hindlegs appear weak, her hindfeet look to turn out significantly and I fear that upside down neck of hers might be a permanent and very unattractive feature which we can only hope her offspring did not inherit.

I can't believe anyone would be willing to stand and hold a horse in this condition for sale- maybe that's why the guy is hiding behind a pillar. Was it too much trouble to throw in extra feed and a good grooming for even a fortnight before you took these shots, cos really, that's all it should take to cause a difference in her, unless there are deeper health issues at work we don't know about.

Poor mare. Used up and unwanted. Lets hope her next ride was not directly to the slaughterhouse. 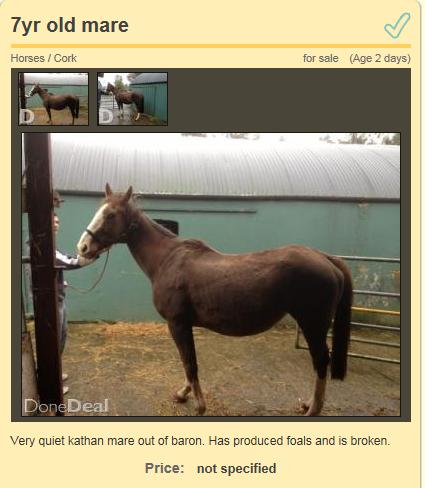 Posted by Xenomorphic at 23:23 No comments:

Here are some perfect illustrations of how I hate to see training ads in horse sale ads, from Dragon Driving. Example 1: 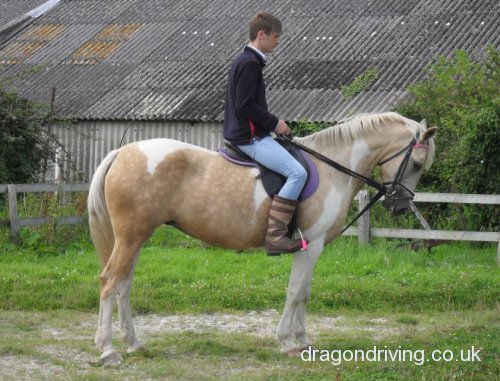 Here we have a sweet looking mare in draw reins. You can see that her head is tucked in beyond what we'd call the vertical- if you draw a straight line down from her ears  her nose is further back than it should be. Look at the overall picture this is causing- she looks like she would fall forward given the chance, and her hindlegs are not in the right position to carry her weight or the riders, which is what we are aiming for through schooling. This link has some further explanations of this.

Looking at this shot I would be worrying just how much she has been ridden like this, particularly in draw reins, and what she might have learned from it. To avoid the constant pressure of the bit some horses learn to back right off it and not accept the contact, tucking their noses in and fixing there. It's called going behind the bit/vertical or being overbent and it's a really annoying fault to try and correct!

Example 2, and here's another 'great' use of training aids: 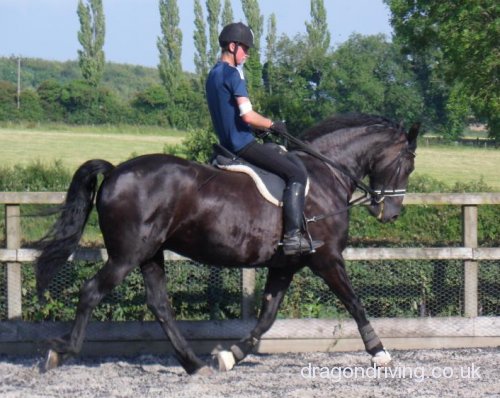 This is a horse that definitely looks capable of working very nicely, with a nice active hindleg, but the fact that again, her head is winched in by the rein attached to her girth, immediately worries me. What does she go like without that assistance? Again, although the angle isn't the best, it appears she is being forced behind the bit (an impression not helped by her rider leaning so far back!). Unfortunately both advert pics show her in the same rein, so it's impossible to get a good idea of how she is without it. 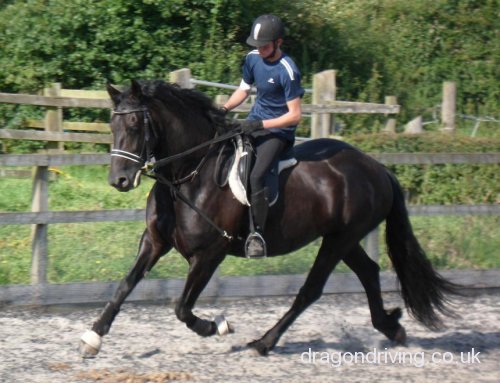 To be fair to the owner, she admits in the blurb that the horse is a bit powerful for her at 5'1, so maybe the reins were introduced to help her feel safer and more able to stop. I only hope the 'dressage guy' who is schooling her is not the guy on her here as you'd like to think he could manage without them!

Overall, I'd rather see a horse going the way it goes without these reins and gadgets than a horse strapped down this way, as that's how I'd be able to assess what i might be able to do with it in future. You can't ride a horse in draw reins in a dressage test, so what's the point of only being able to ride it in them at home?
Posted by Xenomorphic at 23:27 No comments:

Anyway I return to bring you this jaw dropper courtesy of Done Deal: 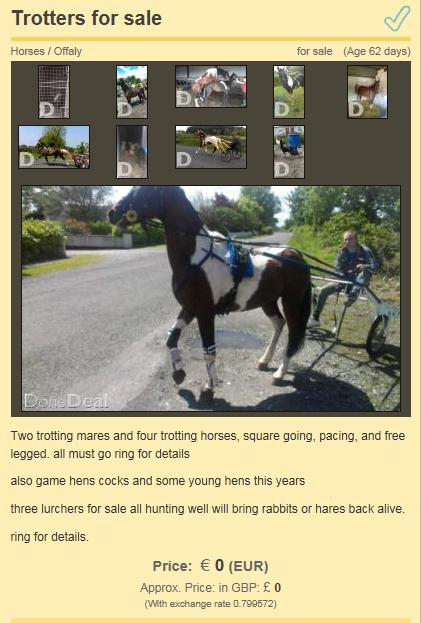 Ok, trotters for sale, no biggie, shown trotting nicely as you might expect, but also shown doing THIS (warning, slightly X-rated). 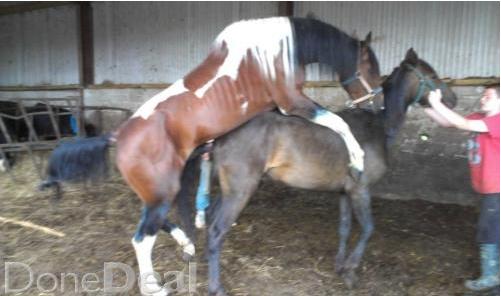 I am not really getting why they included this shot! Not only is it irrelevant to the ad itself (none of the horses are being promoted and sold on their basis of their being breeding stallions, although hey, apparently one is!), but it is not an attractive shot in any way, by any means, and is also an example of sheer idiocy- a CHILD, wearing NO HAT, clinging to a mare by it's halter for covering is MADNESS- oh and hey he's standing directly in front of said mare who could very easily decide she didn't fancy her date after all and make a sharp exit straight over the top of him.

I am also a little disconcerted by the mare herself, who really looks no age poor thing.

Anyway, erratic and a glimpse of near insanity. Had to make ad of the day.
Posted by Xenomorphic at 08:40 No comments:

Just a Suggestion- if the Saddle Blanket's too big for the Horse's Back...

Maybe you shouldn't be riding it?!

I despair sometimes- I mean this just LOOKS so wrong, how can anyone even cast a casual eye over it and say.. yeah good work! 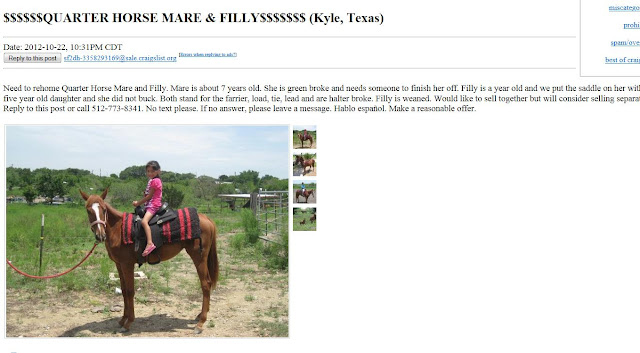 Yes the saddle blanket is so long it practically covers this VERY YOUNG horse's rump!! Here are the close up shots... 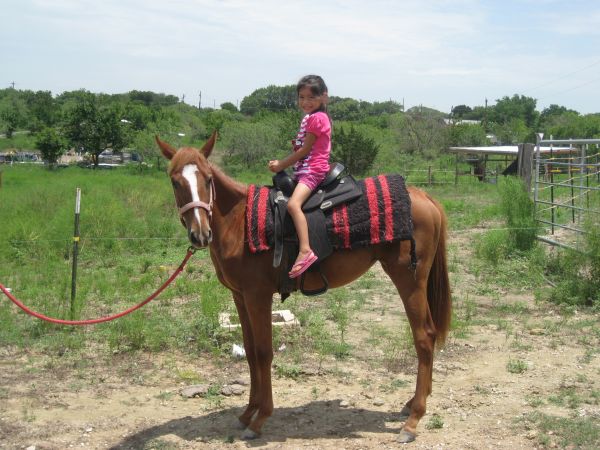 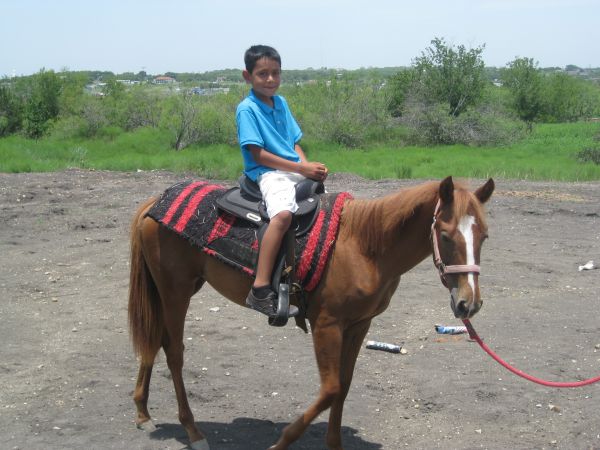 Apparently she's a yearling- barely I'd guess, or slow to mature, she looks very babyish. I quote:

"Filly is a year old and we put the saddle on her with my five year old daughter and she did not buck."

Well that's alright then isn't it?! I mean if the horse doesn't buck that means it's A-ok, foal was born ready to be ridden and would gallop merrily off across country and into the sunset with a rider tomorrow given the right instructions!

I just don't get the point of this. I mean are you, dear reader, looking for your YEARLING to be saddled, backed and started? Wouldn't you rather have an ad telling you about it's excellent ground manners, friendly nature, ease of handling etc..? Why the rush to stick tack on and someone on her back?

This early breaking/starting/riding thing just gets more and more common... if only it got less and less frustrating!

The other big question of course being, if you are now trying to get rid of a mare and a foal, did you use enough forethought in breeding said mare in the first place? But that's a whole other headache to wind up in a future post...

Thanks to Chronicle of the Horse posters for this 'gem'.
Posted by Xenomorphic at 12:46 No comments: